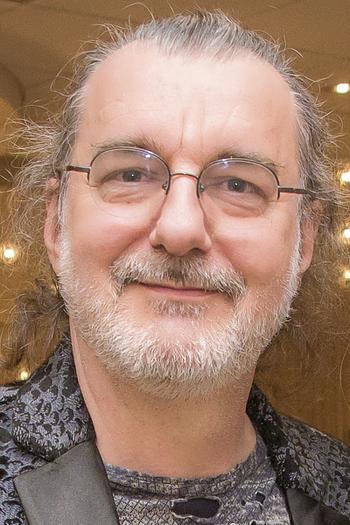 DOUG KATSAROS is an Emmy winning composer who’s work on and off Broadway includes Footloose, The Life, Rocky Horror, Altar Boyz, The Toxic Avenger, A...My Name is Alice, Hal Prince’s Diamonds, Endangered, Sweetee, Laughing Room Only and Gettin’ The Band Back Together. His most recent project as of 2021 is the score for the musical Warhol. He has written several TV scores including the original animated "The Tick," “The Jim Henson Hour” and “Mancuso FBI,” as well as music for several films including the sci-fi classic “Star Crystal” and Sandra Bullock’s “Me And The Mob.” He has dozens of gold and platinum CDs for his work with artists such as Kiss, Sinéad O'Connor, Gloria Estefan, Frank Sinatra, Todd Rundgren, Rod Stewart, Judy Collins, B. B. King, Marlo Thomas, Donny Osmond, Richie Havens, Aerosmith, Bon Jovi, Cher, Michael Bolton, and Peter Paul & Mary, among others. He was a founding member of the 80’s band Balance and the 90’s
band GeWaDoKa. He has written special material for Ringling Brothers and Macy's 4th of July Fireworks and Thanksgiving Day Parades and lives in New York with his wife, jazz artist Elise Morris, and yes, he is the guy who wrote "By Mennen".
Our shows by Doug Katsaros